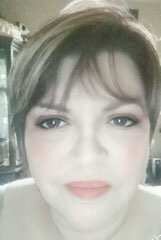 Please share a memory of Jill to include in a keepsake book for family and friends.
View Tribute Book
Jill Marie Williams Hightower, 55, of Talladega passed away surrounded by her family on Thursday, December 15, 2022. A memorial service in her honor will be announced at a later date. Mrs. Hightower was a former employee of The Burton Center and Ronnie’s Pawn Shop. She was also a paper carrier for the Daily Home previously. She enjoyed spending her time doing arts and crafts especially beautiful wreaths and flower arrangements. She was a loving mother, wife, daughter, sister, and aunt. She was preceded in death by her grandparents, Ray and Marietta Grace, John T. Sr. and Janet Williams, and Margie and W.L. Harry. Mrs. Hightower is survived by her husband, Frankie Hightower; parents, John T. Jr. and Janet Williams; daughter, Ashley Gargone; son, Stacy Manning; brother, J.R. (Erica) Williams; niece, Claire Williams; fur babies, Abbie, Gracie, and Zoey, and a host of aunts and uncles. Online condolences may be offered at www.usreyfuneralhome.com. Usrey Funeral Home of Talladega is assisting the family.

Share Your Memory of
Jill
Upload Your Memory View All Memories
Be the first to upload a memory!
Share A Memory
Plant a Tree