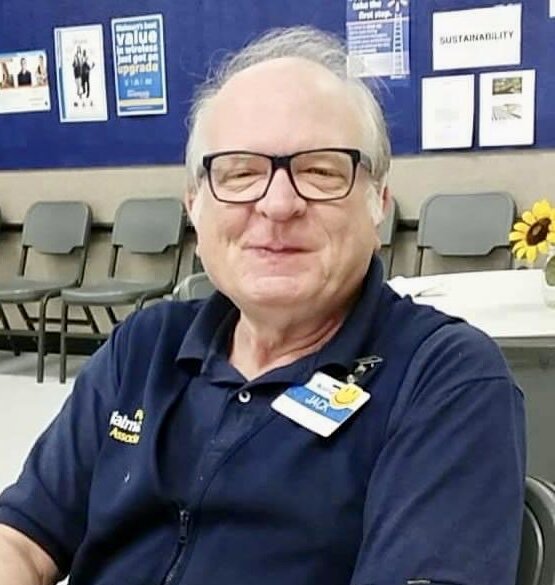 Please share a memory of Jack to include in a keepsake book for family and friends.
View Tribute Book
Jack (or Jackie to close family and friends) was a lifelong resident of Talladega, AL. He graduated from Talladega High School in 1973, and after working third shift for several years at Crown Textile, he started at Walmart in 1985, where he worked until early 2022 when he officially retired. Jack was a well known fixture at Walmart, loved by his colleagues (many of whom became and remained lifelong friends), and loved by Walmart customers, who saw him as a friendly community face and fixture. Jackie was gifted with a musical talent afforded to very few in this world. As the grandson of a Baptist minister, Jackie’s music ministry started very young, admiring the church musicians at Lincoln Baptist Church, and Town Creek Baptist Church, and he spent time with his Grandparents as as frequently as he could. This musical gift allowed him to he find his way to Talladega Creek Baptist Church where he served as their church pianist for many years during the 80’s and 90’s, and then as the church pianist and organist at Northside Baptist Church in Brecon until arthritis and a Sunday morning Walmart work schedule disabled him. Also during the 80’s and 90’s, he was the pianist for several gospel singing groups in Central Alabama – if you had a song, he knew how to play it, and would even find the best key for your voice. You did, however, have to sing loudly so that he could hear, as he had significant hearing loss that started as a child, and the song was absolutely played at his tempo, which reflected his mood. Jackie was best known to his family as the local “JFK assassination” authority, and his book collection regarding the Kennedy family takes up an entire room. If asked, he would be happy to share his evidence-based opinion regarding all conspiracy theories. In between work and church, Jackie could be found in his rocking chair, reading yet another book. Even though he could have written his own book, he preferred reading and collecting them. Jackie also enjoyed all the old TV shows – I Love Lucy, Andy Griffith – and laughing at reruns were some of the best moments with him. Jackie joined his mother and father, Nan Whatley Carlson and Carl Carlson, in heaven, and it is assured that they met him as he crossed over with the full truth about JFK, confirming that Jackie’s theory was right all along. There is also no doubt that Jackie has taken over the seat at heaven’s glorious and grand organ, where he adjusted the volume down a couple of notches because he can hear now. The thought of those things, and the assurance of his celebrations with those whom he loved the absolute most here on earth makes it a little easier to mourn his unexpected passing. He is remembered with love and adoration by his brother Terry Carlson of Talladega, his sister Cindy deSa (Hilaire), of Richmond, VA, three nieces, Brandy (Jason) Gaither, Beth (Skip) Clifton and Terri Carlson of Talladega, three nephews Calvin Carlson of Wilkes Barre PA, Nathan deSa of Atlanta GA, and Daniel deSa of Atlanta Ga, seven great-neices and one great-nephew, many cousins, his Talladega Walmart family and friends, and so many others who brought joy to his life, and brought joy to his. A memorial service to honor Jackie’s life will take place later this summer. Jackie’s favorite hymn: I am resolved no longer to linger Torn by the world's delight Things that are higher, Things that are nobler These have allured my side. I will hasten to him, Hasten so glad and free Jesus greatest highest, I will come to thee.

Share Your Memory of
Jack
Upload Your Memory View All Memories
Be the first to upload a memory!
Share A Memory
Plant a Tree