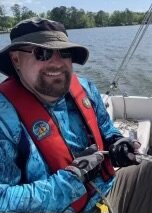 Please share a memory of Andrew to include in a keepsake book for family and friends.
View Tribute Book
On June 14, 2022, Ches Garner of Pell City, AL passed away unexpectedly in Birmingham, Alabama while doing rehab after a recent cancer procedure. He was born January 8, 1980 in Rome, GA to James S. Garner III and Cheryl C. Garner. Ches is survived by his devoted wife Stephanie Runyans Garner, his mother, and his younger brother Samuel T. Garner. His wife Stephanie is supported by her family in the area. Her mother Shawn Story, father Jimmy Runyans, and sister Lauren Runyans Evans live in Pell City while her brother, James Runyans, lives in Hoover. Ches graduated from Darlington School and later Jacksonville State University where he met his wife. He remained active in the Alumni Board of the Delta Chi Fraternity and served as Chapter Advisor. Ches was an avid sailor and enjoyed his time at the Rome Sailing Club. Ches was universally loved by his friends and family, and loved us back; so much so that he bravely fought brain cancer for 17 years to stay here with us. Ches just celebrated his 18th wedding anniversary on June 12, 2022. Stephanie was everything Ches ever asked for in a spouse and provided him with exactly what he needed during his many surgeries and chemotherapy. A memorial service will be held on Saturday, June 25th at 3:30 pm CST at the Usrey Funeral Home, 21271 Hwy. 231 N, Pell City, AL. Receiving of friends will precede the service from 2:00-3:30. In lieu of flowers, please consider a donation in Ches Garner's memory. You may contact The Robert Tisch Brain Tumor Center online at https://tischbraintumorcenter.duke.edu for complete information or the St. Clair County Humane Society at 1605 Cogswell Avenue, Pell City, AL 35125 (205)467-2493.

Share Your Memory of
Andrew
Upload Your Memory View All Memories
Be the first to upload a memory!
Share A Memory
Plant a Tree