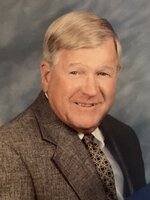 Donald Ray Hutcheson, 82, of Pell City, AL, went to his heavenly home on January 5, 2022 after a battle with Cancer. Don was born on September 5, 1939 to Leon and Emma Lou Hutcheson (Eiland) in Andalusia, AL. After Don graduated from Andalusia High School in 1957, he went on to study at Auburn University. After graduating in 1962 with a degree in Industrial Engineering he started his first job at Wolverine Tube in Decatur, AL. He then worked 7 years at Kaiser Aluminum in Gramercy, LA. He finished up his career by working at Tembec paper company in St Francisville, LA. Don retired from Tembec in 2001. In 1959, Don met Mima Jo Hutcheson (Hughes) in Opp, AL. They were married in 1963 and have recently celebrated 58 years of marriage. Don and Mima Jo went on to have 2 children, Don “Dray” Hutcheson (55) and Lance Hutcheson (52). In 2001, Don retired and built a home on Blackwater Bay in Milton, FL, where he loved having kids and grandkids out on the water. Later, Don and Mima Jo moved to Lake Logan Martin in Pell City, AL, where they continued to entertain friends and family on the water. Don enjoyed serving the church and was on multiple committees. Earlier, Don was known as “Coach Hutcheson” as he was always involved with coaching his son’s athletic teams. He impacted the lives of so many young people during his youth coaching career. Don’s love of the Auburn Tigers counted for many hours on the phone with his best friends that he has known all his life. Don was never short of words of wisdom from his own life experiences and loved sharing those stories to everyone he met. Don was predeceased by Leon Hutcheson (father), Emma Lou Hutcheson (mother), Doris Palmer (sister), Mary Alice Waters (sister). He is survived by Mima Jo Hutcheson (wife), Don “Dray” and Jana Hutcheson (son and daughter-in-law), Lance and Lissy Hutcheson (son and daughter-in-law), Molli and Chris Curtis, (granddaughter and son-in-law), Christian and Chelsea Candanedo (grandson and daughter-in-law), Hayden Hutcheson (grandson), Peggy “Joyce” and Roy Whittle (sister and brother-in-law), John “Billy” and Myrtle Hutcheson (brother and sister-in-law). Visitation will be held at Cropwell Baptist Church in Pell City, AL on Saturday, January 8, 2022 at 1:00pm with service starting at 2:00pm. A graveside burial service will be held at Peaceful Acres Memorial Gardens in Opp, AL at 2:00pm on Sunday, January 9, 2022. In lieu of flowers, the family requests donations be made to MD Anderson Cancer Research Institute in Houston, TX, a hospital that gave us so many additional years with Don and he felt strongly about. Condolences may be offered online at www.usreyfuneralhome.com. Usrey Funeral Home, Pell City, is in charge of arrangements.