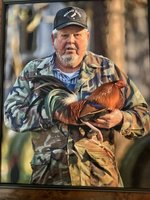 Eastaboga – Jerry Wallace, 81, passed away June 10, 2021. His funeral service will be 2:00 p.m., Sunday, June 13, at Eastaboga Baptist Church with Rodney Prickett officiating. There will be a visitation for extended family and friends for one hour prior to the service also at Eastaboga Baptist Church. He was a native and lifelong resident of Eastaboga. Jerry and his wife Jean owned and operated a produce stand on Speedway Boulevard for many years, he was a hunter and a fishing legend known as “Catfish Daddy”. Survivors include his wife, Jean; sons, Michael (Katherine) Wallace, Scotty (Deanna) Wallace, Larry (Laurie) Mullinax, Michael (Marsha) Mullinax; sister, Willadean Messer and a host of grandchildren, great-grandchildren, and great great-grandchildren. Preceding him in death were his parents, Luke, and Pattie Wallace. Pallbearers will be Frank Dabbs, Randy Crow, Mitchell Martin, Neal Phillips, David Gobel and Wes Jones. On-line condolences may be offered at www.usreyfuneralhome.com Usrey Funeral Home of Talladega will direct the service.