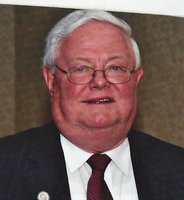 John Carlton Smith, 83, died June 17, 2020, following a brief illness. Carlton was born on May 2, 1937, in Talladega, Alabama, son of John O. “Boots” and Mary “Dot” Smith. He is survived by his wife of 64 years, Martha Lou, and two sons, John Kenneth (Brenda) and William Earl, sister, Virginia Ann Disspain (Jim), and sister-in-law, Janet. He is also survived by two beloved grandchildren, Mary Elizabeth and William David. He was predeceased by his parents and a brother, Robert Earl. Carlton played football at Livingston State College. Following graduation in 1959, he became the line coach at Bullock County High School. In 1961 his National Guard unit was activated. Following a year of military service, he returned to Bullock County and served as head football coach until 1967. Carlton received a Masters Degree in Administration from Auburn University and a Doctorate in Administration from the University of Alabama. He served as the first Superintendent of the Hartselle City School System and as Superintendent of Tuscaloosa County Schools and Vestavia City Schools. He also served as Interim Superintendent of the Auburn City Schools. During his lengthy career, he also served in the administration of the school systems in Jackson, Mississippi and Columbia, South Carolina and in numerous school systems in Alabama. Following retirement, Carlton served as Executive Director of the Spring Valley School, a private school whose mission he quickly took to heart. Spring Valley is an independent college preparatory school for students with learning disabilities in Birmingham, Alabama. Always a strong advocate for schools whose mission is to benefit the children first, he embraced the Spring Valley goals of helping students achieve their best. A memorial service is scheduled for Monday, June 22, 2020, at 10:00 a.m., at Dawson Memorial Baptist Church in Homewood. A graveside service will follow at 2:00 p.m. at Pine Hill Memorial Park in Talladega. Honorary pallbearers are present and retired school superintendents, principals, coaches, players, students and co-workers. In lieu of flowers, donations can be made in memory of Carlton Smith to: Spring Valley School, 2701 Sydney Drive - Birmingham, Alabama 35211, or on-line at: https://forms.diamondmindinc.com/springvalley/onlinegiving?token=313320601, or to: Dawson Memorial Baptist Church, 1114 Oxmoor Rd., Birmingham, Alabama 35209 On line condolences may be offered at www.usreyfuneralhome.com Usrey Funeral Home will direct the graveside service.