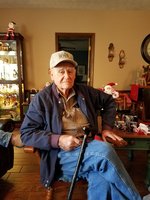 Marvin was born in Chilton County, Alabama, but was raised in Talladega County where he was a lifelong resident.

In his early years, he served his country during World War II in the European Conflict as a member of the 1st Armored Division, 13 Company C as a tank driver. He fought along the front lines in North Africa, Switzerland, Italy, England, France and Germany serving 2 years and 10 months in the Army.

After his tour of duty, Marvin returned to the states and married Maurine.  He owned and operated a sawmill and logging company.  He was an avid hunter who loved to hunt deer, turkey and quail.  During his later years, he enjoyed being “Pa Pa” or “Paw” to his many grandchildren.

Marvin was a great man who will truly be missed by many.

Funeral Services for Marvin F. Brewer will be held on Tuesday, May 14, 2019 at Usrey Funeral Home.  Visitation will be from 12:00 until 2:00.  The funeral service will start at 2:00 with Chaplin David Rozelle officiating.  Pallbearers will be grandsons and great grandsons.